The Greater Kansas City AAZK chapter will be hosting its 35th annual Bowling for Rhinos event on April 24th 2022!

New Date for Bowling For Rhinos

Due to the corona virus and wanting to keep everyone safe, we have moved the date of Bowling For Rhinos this year. We will be hosting the 33rd annual bowling event on Sunday August 9th, which happens to be the same date that the very first event was held 33 years ago!

Early bird registration has been extended through July 26th.

Yes that is right folks we are starting preperations for GKC AAZK's 32 Annual Bowling for Rhinos! Save the date for March 31st to join us for a fun night of bowling and prizes!

For 2018, we will be meeting on the 4th Tuesday of each month at 5:15pm at Lakeside Nature Center (unless otherwise noted).

All of us at GKC-AAZK are pumped about pollinators!  We had a fantastic presentation in August about "Bee-ing the Solution" and we're gearing up for a native seed sale fundraiser this fall!

Are you as pumped as us?!  Grow Native! has a website that is full of resources on native plants that will attract pollinators like bees and butterflies, beautify your lawn, help clean our air, and cut down on yardwork!

Visit grownative.org for more information!  And be sure to check out these companion cards that can be downloaded as pdf files: Pollinator Buffet and Monarch Cafe!

Join GKC AAZK for a fun night of learning about bees on Saturday August 26th from 6-8pm at the Lakeside Nature Center. Our presenter Jarrett Mellenbruch will be discussing his special art project Haven Hives. These special sculptures are working beehives that will eventually form a nationwide bee sanctuary.

Light snacks that are Bee pollinated will be served. Admission is donation based, and all proceeds will go to help Haven Hives!

****SPACE IS LIMITED***** Please RSVP to [email protected] or on the Greater KC AAZK Chapter's Facebook event to reserve your spot. 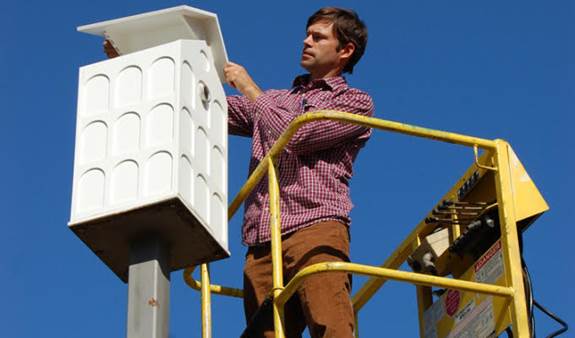 Learn about bats and why they are important contributors to our environment! Get tips for how YOU can help bats!

$3 per person for current GKC-AAZK members

$6 per person for friends and family!

RSVP to Jacque at [email protected] or on our Facebook page by May 15th!

Josh worked as an animal care professional for almost ten years, where he developed a strong affinity for bats above all other species. He's enjoyed the opportunity to care for species ranging from the endangered Rodrigues fruit bat to the (relatively) diminutive Egyptian fruit bat, including working as the AZA SSP coordinator and Studbook keeper for the Egyptian fruit bat.

He will be discussing a general overview of the bats of the world, including some of the noteworthy differences between the two major subgroups of bat (both in terms of their form and their evolutionary history), the myriad of niches this order occupies, and the tremendous benefits bats provide to both humans, and the environment in general. He will also provide some basic information regarding bat box construction and placement.

John has been involved with rehabilitating Missouri wildlife since 2002 when he and his wife Kristine became volunteers at Lakeside Nature Center. As licensed wildlife rehabilitators through both MDC, and USFW, they have worked with many of the states mammal and bird species, including Missouri's bats.

John will be presenting information on the different bat species found in Missouri, including ranges, habitat, and behavior. He will also talk about what's involved in rehabilitating bats, and dealing with public contact. He will have some information to hand out, and if the timing is right, he may have some live bats for everyone to see.

It's that time of year again!  The GKC-AAZK will be placing an order for Tree Kangaroo Coffee from PNG YUS and Caffe Vita.

Prices are for whole-bean coffee and includes shipping costs from the roaster in Seattle.  This coffee is only available for a few months of the year!

Get your brew on and purchase some of this amazing roast!

In collaboration with Woodland Park Zoo and Tree Kangaroo Conservation Program (TKCP), Caffe Vita presents this exclusive roast from the YUS Conservation Area of Papua New Guinea. This coffee was grown under native shade in the gardens of those who have pledged their land for conservation.

Through a community based approach, TKCP has worked with local landowners to establish over 180,000 acres of protected land, home to the endangered Matschie’s tree kangaroo. Due to its remote location, the people of YUS have struggled to generate income for health care, education, and other necessities. TKCP approached Caffe Vita some four years ago with the idea of working together to address this challenge by establishing a sustainable coffee program.

Caffe Vita will give $4.00 from every PNG YUS bag sold to the Tree Kangaroo Conservation Project. This exclusive coffee from Papua New Guinea is named for the Yopno-Uruwa-Som region – a unique climate that produces wild animals and excellent coffee.

Bill Araujo's presentation Wildlife Photography 101: Tips for Taking Better Pictures, With an Emphasis on Wildlife Photography is a special treat offered by Bill for our membership. Bill's years of experience will help everyone from amateur to expert to achieve outstanding photos of those difficult-to-photograph subjects--wildlife--in both natural and zoological settings.

Bill Araujo was a docent for more than 12 years at the KC Zoo. He currently volunteers at Ernie Miller Nature Center where he is a story teller and presents raptor and wildlife presentations. His photographs have been used and published by: The Kansas City Zoo, Ernie Miller Nature Center, the City of Overland Park, Parks and Recreation and the two Overland Park Golf Course websites. To view more of his work and photography tips, visit his website at ImagesByBillA.com.

$3 per person for non-members, friends & family. Current GKC-AAZK Members get in for FREE!

RSVP to Jacque at [email protected] or on our Facebook page by April 10th!